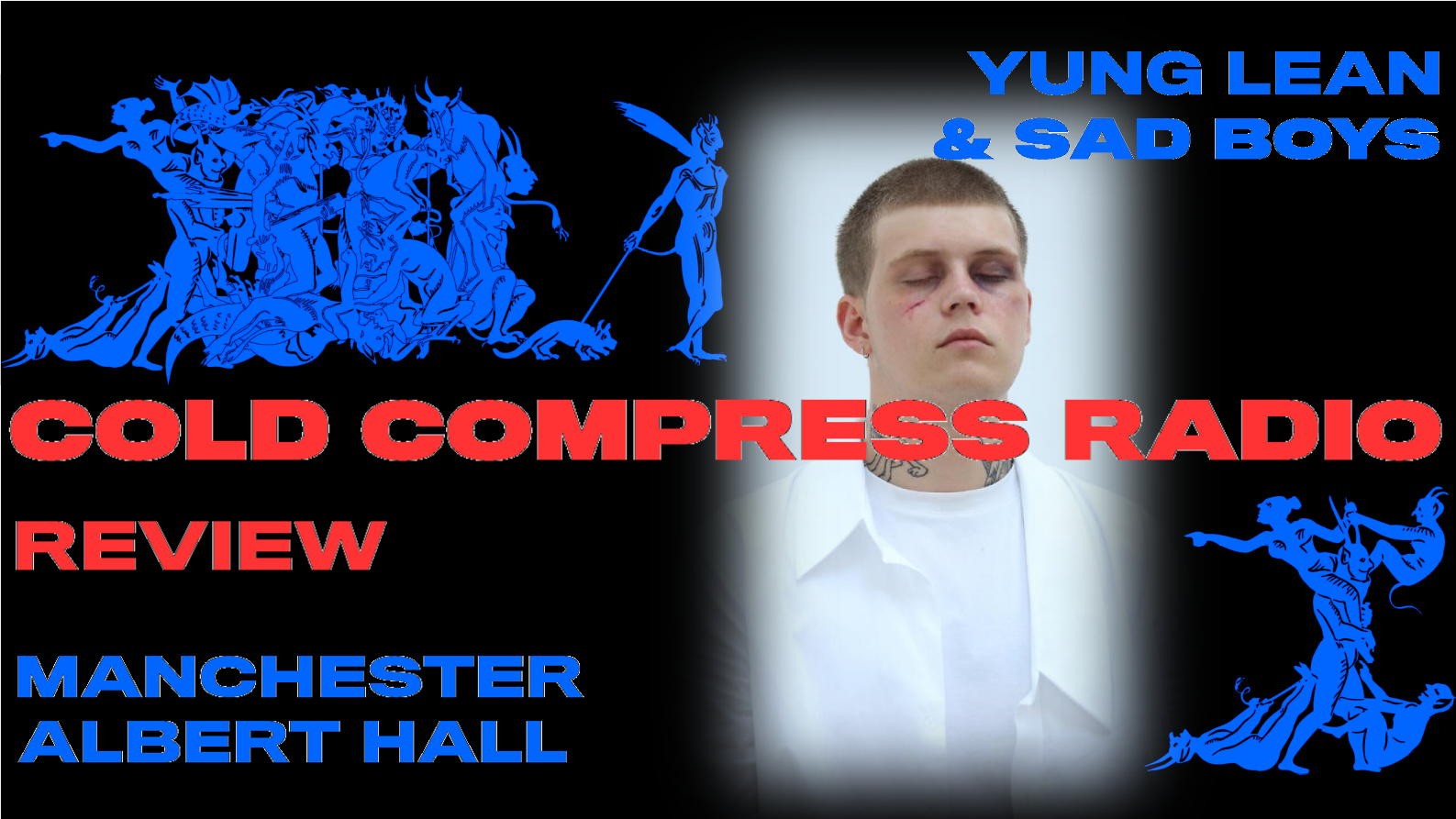 Note:  The songs detailed in this article are written in order of performance.  Hope you like the read.  - H


Prior to arriving at the live show, it was raining and then it snowed.  As I passed an AriZona Iced Tea outside the grand, stone facade of the Albert Hall, I realised that I had been there before in the summer for the ‘Dot to Dot’ festival so I knew that I was in for a treat.

The building is beautiful.  It has large staircases from the inside entrance that lead up to the main room, which exhibits a bar and a stage in front of a full brass organ, as well as an upstairs bar and balcony with seating.  Exquisitely carved patterns spiraled and squirmed around the perimeter of the walls.  After squinting up at the drinks menu with an eyebrow raised, I asked the pretty girl behind the bar what their cheapest beer was.  She gave me the name and I asked how much and she said ‘£5.20’.  I felt like clutching a hand to my chest, arching forward and groaning into the wooden surface of the bar but I retained my composure.  Looks like I’m not getting drunk tonight, I thought.  We had a polite exchange but a smile was not returned when I went back for water at the end, perhaps due to it being a long shift of serving swank youngsters.  From the downstairs bar one may have a clear view of some awesome music coming from the stage.

...a mass of arms jumped up and down from a teeming sea of experimental haircuts.

Bladee appeared onstage in a fur coat at 8:15pm with robotised autotune over thundering basslines, delivering catchy melodies and occasionally getting to his knees in dramatic pose.  The supporting artist and Sad Boy associate played such songs as ‘No Life Left’, ‘Wickr Man’ and 'Who Goes There', the latter being the most crowd pleasing.  For the purpose of review, the audio quality at the Albert Hall is on point: everything sounded great.  Yung Sherm was on the decks and doing the speakers a service; looking small but spinning up a storm as the mixing was consistently smooth.  The music rattled between the stained glass windows and the energy of the audience was incredible – a mass of arms jumped up and down from a teeming sea of experimental haircuts.  Then, observed from the upstairs balcony, the middle of the entire crowd would sway to one side of the room, causing a wave to follow back across the stumbling youths.  It seems as though people are unsure of how to dance to this form of music and instead jostle and push with those around them.  For all one knows Sad Boys are slightly ahead of their time and it may be a better experience to see them live in a few years.  If you would like more space to move perhaps an outdoor setting would present such a condition.  Nevertheless, Bladee’s performance showed that this was the place to be and he exited the stage at 8:34pm after a humble twenty minutes.  The crowd did not dwindle in size before the long wait for the next part of the show. 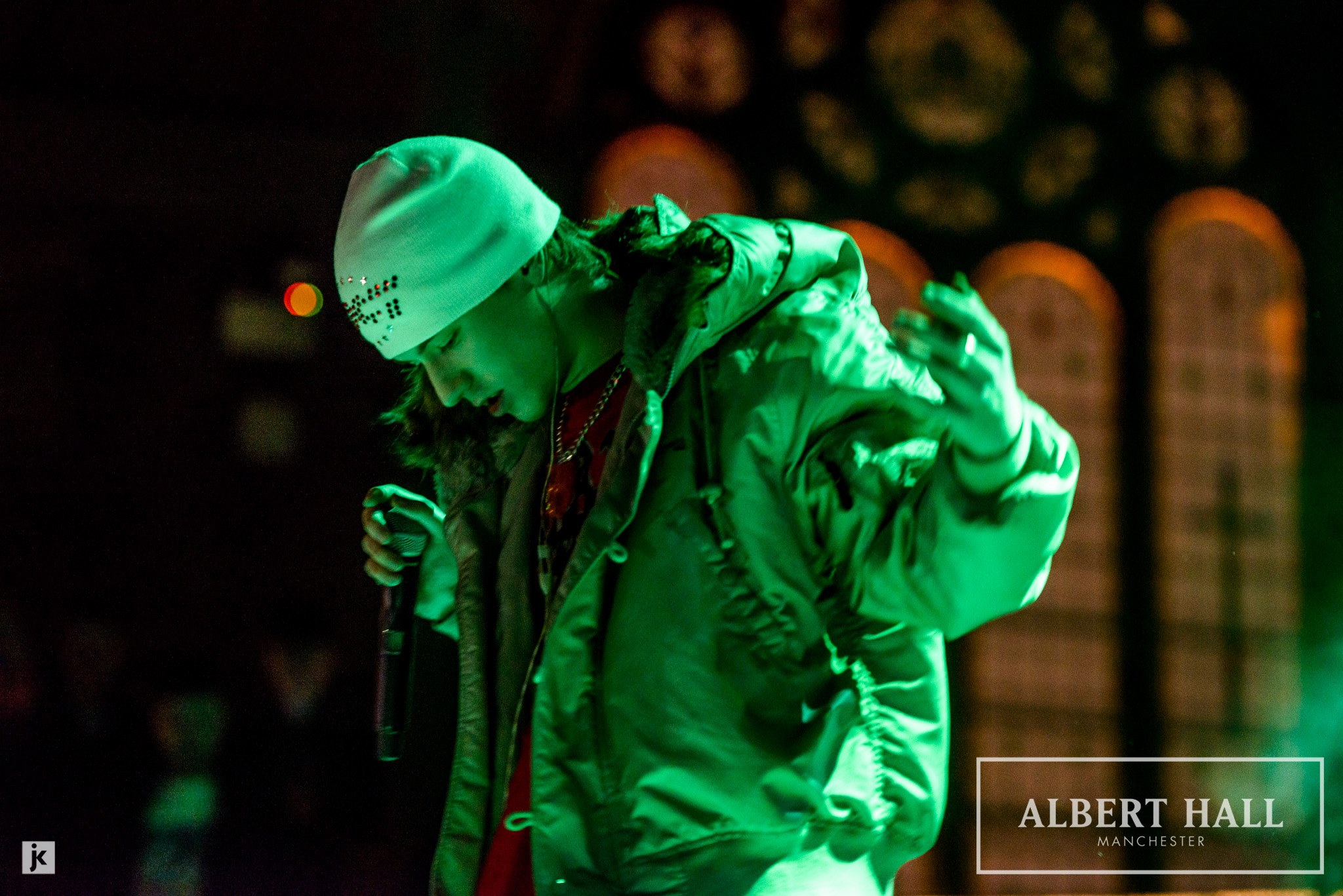 The stench of weed rose to the rafters, permeating from somewhere within the crowd.  I began to analyse the unusual dress of the Yung Lean fans as I ascended the main set of stairs and found a clunky pair of Nike Air Max shoes attached to some baggy blue camo trousers and a futuristic, white long sleeve tee.  The kid who was wearing this garish ensemble sported a bowl-shaped, Lean-inspired haircut and looked like a retarded astronaut.  Some were dressed strangely, wearing conspicuous clothes that didn’t match or fit, which seems to be part of the '2001' style popularised by Yung Lean and Sad Boys.  There were also a few goth girls there plus the usual road men and expected hype beasts.  Adolescents of all different walks of life were turning up on this night and most seemed prepared to have a good time of some sort.  There was even the odd old head present; none of whom seemed particularly taken by the scene in front of them (no nodding of heads or tapping of feet – utterly stationary and staring stubbornly).  By the end of the show I looked down from the upstairs balcony at the swathes of kids and felt a tremendous sense of unity with all those gathered underneath the ornate stone ceiling.  The majority of us were all there for the same reason: to get lit to melodic Swedish trap music.

I saw a sorry excuse for a zoot to the left of me and heard rowdy teenagers to my right.

Back in the main room, I later witnessed someone being escorted out by security for smoking indoors.  It’s a shame that they sacrificed such a fun experience for just a quick fix of nicotine.  Two members of security in black shirts and ties cut through the crowd like a hot knife through butter and I opportunely followed them to ensure a central position in the audience.  Twenty minutes had passed with little development onstage.  A stage technician was performing a sound check with a finger pressed against an earpiece, nattering tests into a microphone which were unheard through the speakers.  The time then ticked on to ten past nine and there was still nothing.  Smoke began to fill the stage and the crowd cheered at the sight of the vapour and there were deep chants of ‘Lean!  Lean!  Lean!’.  I saw a sorry excuse for a zoot to the left of me and heard rowdy teenagers to my right.  One of them asked his skin-headed mate if he wanted a key and then shouted over to another mate of his something about not going to school the next day.

‘I haven’t done the maths homework anyway’, he said.  The average age at the show was probably around 18 years. 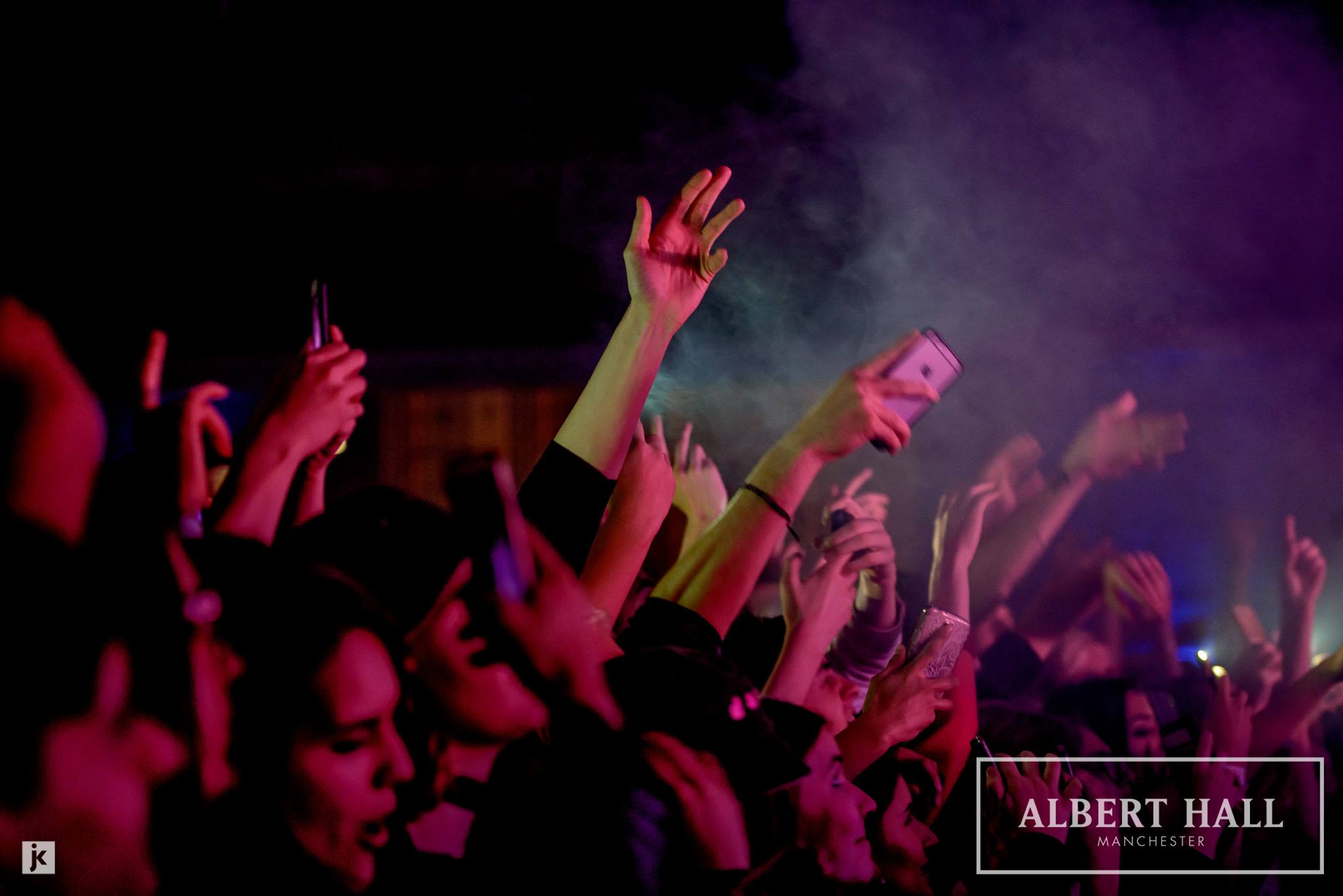 As the wait for the show became greater, eager restlessness increased.  At one point, a lad crowd surfed in front of us and shouted a greeting to the group of teens next to me.  This sparked a few cheers from the audience but not without catching the attention of members of security, who popped up like meerkats in front of the crowd.  A girl who attempted to crowd surf ended up totally upside down, continuing to be convoyed around the audience.  A pair of Doc Martens could be seen waving helplessly above our heads and this was the funniest moment of the show.  Multiple people got away with crowd surfing but others, who were unfortunately steered towards security, were pulled over the barrier.  As we waited patiently, this girl and I had some unspoken fun by nudging each other to and fro but soon I would be fully ‘nudged’ around by the energetic ensemble that was soon to occur.  The mosh pits would be fairly cramped yet resounding.

We were all singing the hook, jumping and sweating with gusto.

Yung Lean, the man himself, took to the stage at about nine thirty, opening with ‘Muddy Sea’.  The hype was immense.  The first three songs were from the recent album ‘Stranger’ and I hit a sick adlib during ‘Skimask’, which is the ‘(Walk up, Walk up)’ at eighteen seconds.  Thirdly, ‘Drop It / Scooter’ allowed for a brief period of resuscitation (which was not without a bit of shoving and toe trampling) before a ‘Warlord’ banger, ‘Afghanistan’, ripped through the crowd.  We were all singing the hook, jumping and sweating with gusto, attempting to assert some footing before being lurched about to the atmospheric, electronic production.  Five songs in, as ‘Metallic Intuition’ began to play, I had to look for some fresh air and stood by the edge of the audience with my back to the bar as the show continued to stomp ahead. 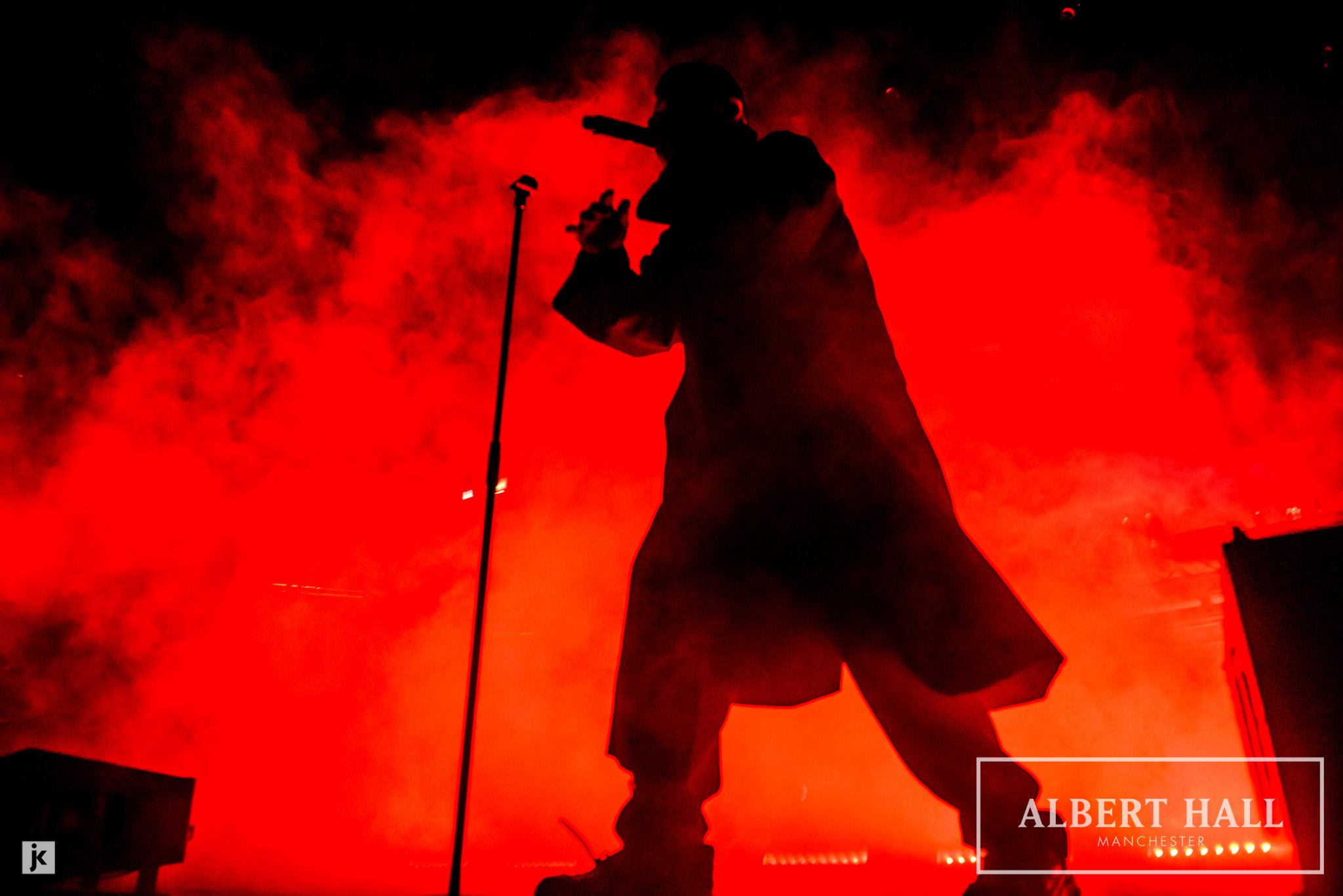 One time, a boy a couple years younger than me wearing a backwards baseball cap turned around and said ‘Esskeetit!’.

The same boy then turned back to another person within the audience and recited the same turn of phrase.  The person claimed that he didn’t know what the kid was saying so the kid repeated the exercise with no change in formula until the other person responded with an ‘esskeetit’ and they exchanged a fist bump.  Although juvenile, this practice seemed to summarise the general mood of excitement in the room which swelled upwards as the epic synths of ‘Diamonds’ began.

...an empty mic stand stood alone in front of flashing strobe lights to the crashing instrumental rendition of the song.

Upon reflection, I’m definitely going to listen to more music by Bladee; he sort of stole the show from his cohort during his part in ‘Hennessy and Sailor Moon’ as it resonated with the audience powerfully.  Yung Lean continued to hold the attention of the room, for that matter, sometimes making slow, rocking movements with lazily outstretched arms to give a distinctive impression as if he were a puppet on string.  Lean then performed a harmonious vocal outro to ‘Red Bottom Sky’, which added extra substance to a live version of the well-known single.  Sherm and Gud were DJ-ing simultaneously; each hooded and stooped over a mixing plinth on either side of the stage, Gothic in appearance and flawless in sound.  Lean momentarily left the stage during ‘Miami Ultras’ and an empty mic stand stood alone in front of flashing strobe lights to the crashing instrumental rendition of the song, portraying a dramatic exit.  High pitched screams could be heard from the audience and it has been reported that he crowd surfed, which may have led to some technical difficulty.  As he returned to the stage, Lean continued to perform the angry hook of the song while a technician scuttled behind him, quickly fiddling with the mic pack on the artist's waist.  We witnessed much music by Yung Lean; it got a bit protracted for me but Lean was very grateful to see the support from his fans in Manchester.  ‘I love the British, man’, he remarked to bountiful applause, ‘I’m a quarter British; my Grandfather was British, man’.

Mine too, I thought. I continued to watch the rest of the show from the middle of the upstairs balcony.  Lean showed further appreciation for his more long term fans by playing a few throwbacks such as ‘Kyoto’ and ‘Monster’.  In selfish response, somebody from the crowd threw something that fell short of the mic stand and skidded towards the back of the stage.  Lean didn't flinch but this drew attention to the possible danger that any artist must face when performing in front of a live audience, which I concede some respect for.  This bravery may be symbolised by the soldier-like imagery of the final song ‘Yellowman’, wherein Lean implemented a slightly awkward march and salute to the advancing beat of the drums and horns.  Lean thanked us again and the set then finished at 10:35pm. 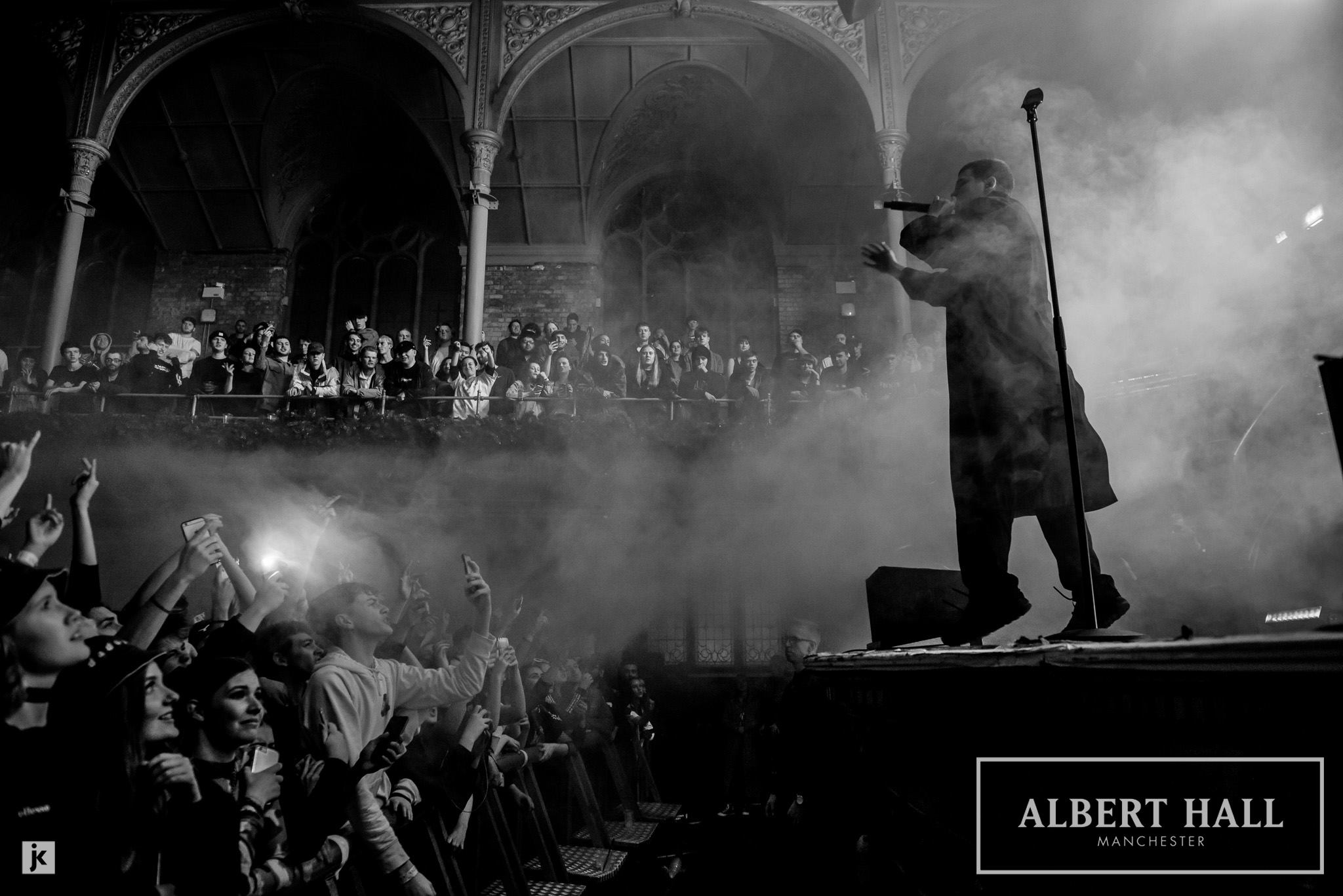 Despite previous projections, I didn’t cop a t-shirt with the European tour dates on.  This may have been a mistake: next time I won't hesitate.  There were t-shirt-toters outside the venue as well and the unofficial branding held my attention for about half a second before I was washed onto the street with a flood of satisfied fans.  As I waited for the bus I thought to myself how much fun the event was and how great it is for the youth to have something to do in Manchester.  Yung Lean seems to be an authentic artist with a big fan base and I’m lucky to live in an area frequented by such important figures of contemporary music.  Ultimately, it really was a fantastic show as the venue was accommodating and well organised and seeing the music was an enjoyable and communal experience.  Yung Lean and Sad Boys couldn’t have left me feeling any happier.